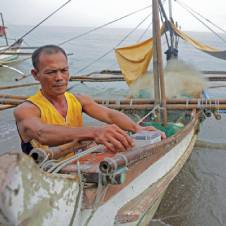 As reported in Celebrating Victories

Two sets of petitioners filed separate cases challenging the legality of Service Contract No. 46 (SC-46) awarded to Japan Petroleum Exploration Co. (JAPEX). The service contract allowed JAPEX to conduct oil exploration in the Tañon Strait during which it performed seismic surveys and drilled one exploration well. The first petition was brought on behalf of resident marine mammals in the Tañon Strait by two individuals acting as legal guardians and stewards of the marine mammals. The second petition was filed by a non-governmental organization representing the interests of fisherfolk, along with individual representatives from fishing communities impacted by the oil exploration activities. The petitioners filed their cases in 2007, shortly after JAPEX began drilling in the strait.

In 2008, JAPEX and the government of the Philippines mutually terminated the service contract and oil exploration activities ceased. The Supreme Court consolidated the cases for the purpose of review. In its decision, the Supreme Court first addressed the important procedural point of whether the case was moot because the service contract had been terminated. The Court declared that mootness is “not a magical formula that can automatically dissuade the courts in resolving a case.” Due to the alleged grave constitutional violations and paramount public interest in the case, not to mention the fact that the actions complained of could be repeated, the Court found it necessary to reach the merits of the case even though the particular service contract had been terminated.