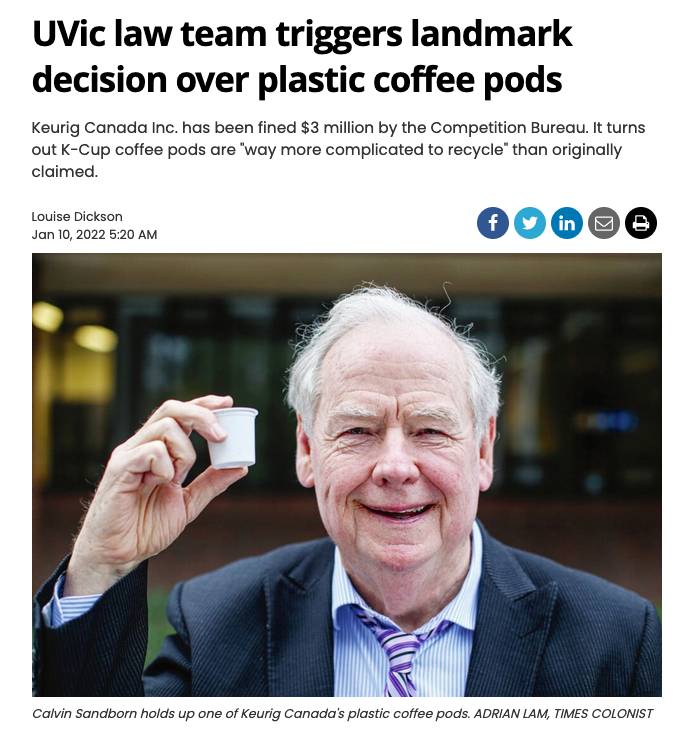 “The Environmental Law Centre at the University of Victoria is winning big against plastic pollution in Canada. ELC’s latest victory was announced in Canada’s leading news outlets:

Keurig will pay a $3-million penalty for making false and misleading claims that its single-use K-Cup pods can be recycled!

"Bronwyn Roe of Ecojustice joined in filing the Keurig complaint," says Calvin Sandborn, ELC Legal Director. "In addition to the fine, Keurig Canada was ordered to publish a series of large Notices acknowledging the deceptive marketing finding in major newspapers across Canada, on Twitter, Instagram, Facebook, and on the Keurig Canada website, and send emails to everyone in their database about the deceptive marketing decision."

Calvin has collaborated with ELAW for 15 years, inspiring grassroots advocates around the world.

“The information that we received from ELAW partners helped give us a greater understanding of the flaws in the recycling model for dealing with the plastics crisis, and the role of contamination in plastic recycling,” says Calvin. “This was extremely helpful in allowing us to take a critical eye to Keurig’s claims about recyclability.”

The Times Colonist reports on the stunning victory:

“When Calvin Sandborn sat down with Margaret Atwood three years ago to write an article urging the federal government to develop a national plastics strategy, he never imagined it would lead to a $3-million fine against Keurig Canada Inc. and a landmark decision about the false advertising of environmental products.

But the day after the article was published, Sandborn, the legal director of the University of Victoria Environmental Law Centre, received a letter from the president of Keurig Canada, stating the company was a leader in sustainable development and that all K-Cup pods in Canada would be recyclable by the end of 2018.

Sandborn was curious when he got the letter. He looked at the company’s ads, which claimed that Keurig’s single-use plastic beverage pods were good for the environment because they could be recycled if consumers peeled off the metallic lid and emptied out the coffee grounds.
“I just had an innate feeling that the cardboard box full of Keurig pods in the faculty room was not part of the environmental solution,” Sandborn said.

He and his team at the Environmental Law Centre investigated and submitted a report to the Competition Bureau in May 2019. Their report said Keurig’s advertising about the recyclability of its coffee pods was not only misleading but was causing substantial harm to recycling efforts across the country.

On Thursday, the Competition Bureau agreed. It announced that Keurig will pay a $3-million penalty for making false and misleading claims that its single-use K-Cup pods can be recycled. The company also voluntarily agreed to make an $800,000 donation to an environmental charity and pay $85,000 in Competition Bureau expenses for the case.”

Congratulations Calvin and the ELC team!