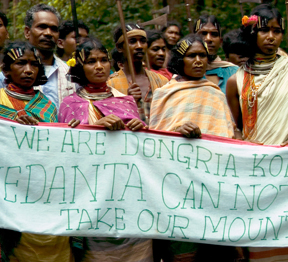 The tribal people of the Niyamgiri Hills in eastern India won a David and Goliath battle protecting their ancestral lands from a London-based mining giant. In August, authorities in Delhi revoked permission for Vedanta Resources to mine bauxite from hills in Orissa State where the Dongria Kondh live as forest dwellers.

“The Dongria Kondh tribal community holds the Niyamgiri Hills sacred,” says Mark Chernaik, ELAW Staff Scientist. “If the project were approved, it would have meant an irreversible loss of the rich biodiversity of the Niyamgiri hills and a centuries-old way of life.”

Ritwick is an attorney at the Delhi-based EIA Resource and Response Centre. He has represented petitioners before the Central Empowered Committee, the Supreme Court, the High Court and presently the National Environment Appellate Authority (NEAA).

Ritwick writes: “The Vedanta case is surely a triumph of tribal people over corporate abuse . . .ELAW helped in critiquing and comparing the two versions of the EIA report prepared by the company which prompted the NEAA to order for the suspension of the Environment Clearance by the NEAA. There are many similar projects currently under adjudication where the detailed critique was done by ELAW. In most cases that we have taken up, the support of ELAW is invaluable.”