Clean Water and a Healthy Environment in Argentina 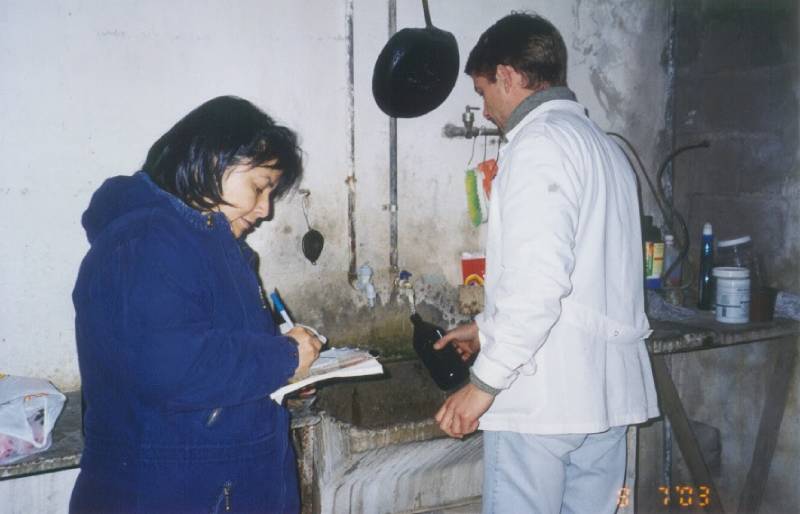 In 2003, ELAW Staff Scientist Meche Lu (above, left) worked with a local lab technician to test water in a family home in Chacras de la Merced, Argentina. In 2005 (below), she posed for a photo with attorney Juan Picolotti (left) and a community member near potable water tanks provided by the city. 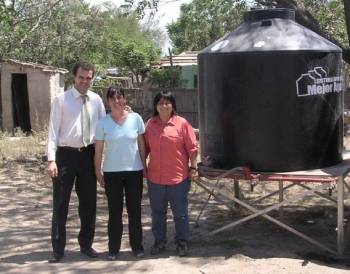 We are thrilled to report good news from Chacras de la Merced, a community along the Suquía River at the eastern end of Cordoba.

Since the 1990s, local authorities have argued that the municipality of Chacras de la Merced and the Córdoba province are not responsible for the malfunctioning Bajo Grande wastewater treatment plant, which has been polluting the river and local wells for decades. Last week, the Cordoba Civil Court ruled that the municipality and province are responsible and must draft an environmental restoration plan.

“This court ruling is a great step,” says Juan Picolotti, a lawyer at Center for Human Rights and the Environment (CEDHA). “The residents of Chacras de la Merced have fought for decades and will work hard to enforce this ruling.”

This recent victory comes after years of hard work.

I traveled to Chacras de la Merced in 2003 to collaborate with CEDHA and a local laboratory to test water quality in the Suquía River. Wells along the river were the community's only source of water and many children and family members suffered from gastrointestinal illnesses. The smell of raw sewage hung in the air.

We were alarmed to find that the family wells were contaminated with dangerously high levels of fecal coliform bacteria. CEDHA and community representatives presented the test results to the court, which ordered the authorities to provide drinking water to the community. At first, the city installed water tanks and delivered drinking water by truck. When Juan and I visited Chacras de la Merced in 2005, we saw that pipes to deliver potable water to homes were being installed!

The community has called on local authorities for decades to clean up the river. Last week’s ruling is a significant step forward! It deems the city and province responsible for contamination from the sewage treatment plant and orders an independent body to report on the status of the plant and the Suquía River. Authorities must also launch an Environmental Rehabilitation Program, to improve the water quality of the river.