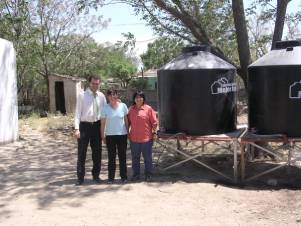 As reported in Clean Water for Chacras de la Merced

ELAW partners in Argentina have won clean water for Chacras de la Merced, a low-income community of 5,000 along the Suquia River on the eastern end of Cordoba. Residents of Chacras de la Merced have been complaining since 1992 about a sewage treatment plant that was built in the middle of their community. The plant needs maintenance, lacks capacity, and frequently discharges effluent into the river. Wells along the river are the community's only source of water and many children and family members are suffering from gastrointestinal illnesses. Grassroots attorneys at Centro de Derechos Humanos y Ambiente (CEDHA) are working with the local community and called on ELAW U.S. for help. ELAW U.S. dispatched its environmental research scientist, Meche Lu, to Chacras de la Merced in July 2003, to work with CEDHA and a local laboratory to test the water. This was Meche’s first trip to Cordoba. She said the conditions in Chacras de la Merced were unbearable. "The smell of raw sewage hung in the air." Community members were eager to meet with Meche and learn, for the first time, about the science behind water pollution. Meche identified sampling points and worked with the local lab and a microbiologist to sample water in local homes and the Suquia River. A notary accompanied the team, samples were delivered to the lab, and the results were ready in 10 days. Family wells were found to be contaminated with dangerously high levels of fecal coliform bacteria -- 2,000 bacteria per 100 milliliters of water! The World Health Organization recommends that no fecal coliform bacteria be present in drinking water. Following Meche’s visit, CEDHA and community representatives presented the test results to the court and requested an injunction. In November, 2003, the court approved the petition and ordered authorities to provide, within 24 hours, 200 liters of clean water per person per day to the affected families. CEDHA and the community are continuing negotiations with local authorities to provide safe drinking water to the entire community and clean up the river.