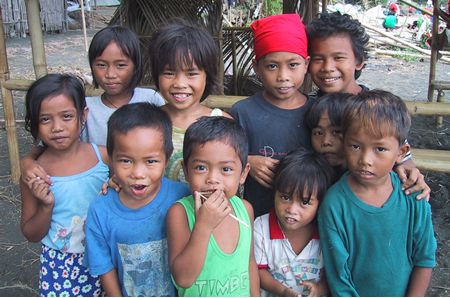 Children from St. Teresita, on the outskirts of Lipa City, Batangas Province, Philippines. E-LAW partners at Tanggol-Kalikasan and Pusod are working with the Lipa Medical Socitety and volunteers from De La Salle Lipa schools to monitor air pollution in the Lipa City airshed, which covers St. Teresita and surrounding towns. PHOTO: Ipat Luna

According to the World Health Organization, contaminated drinking water and other environmental menaces kill 13 million people every year[1]. Many E-LAW partners are working in communities where polluted air and drinking water take a terrible toll.

Now, the Environmental Law Alliance Worldwide is helping people fight back. We are equipping our partners with state-of-the-art scientific equipment, which enables them to identify the pollutants that are fouling their air and water. With this equipment, they can start cleaning up the air and water, and hold polluters accountable.

"We can send the equipment to communities around the world that suffer from polluted air and water, and give people the power to protect themselves," says Mark Chernaik, E-LAW U.S. Staff Scientist.

With support from the Alice C. Tyler Perpetual Trust and the V. Kann Rasmussen Foundation, E-LAW U.S. has provided partners in Malaysia with a hydrogen sulfide gas monitor, partners in the Philippines with an airborne particulate meter, and partners in Liberia with a dissolved oxygen meter, to measure water pollution.

Partners in the Philippines will work with the Lipa Medical Society to test air quality in areas identified as pulmonary disease clusters.

"It would have been impossible to make the factory operator enter into a settlement agreement without ... the handheld equipment to measure the emissions," wrote Chai Sin Chong of the Kuala Kuang Anti-Stench Committee.

Open burning of waste is a huge problem in the Philippines. The burning creates particles made up of a number of components — including nitrates, sulfates, metals, soil and dust — which make breathing a hazard. Once inhaled, these particles can affect the heart and lungs and cause serious health problems.

Our partners in the Philippines plan to work with the Lipa Medical Society to test air quality in areas around Lipa City that have been identified as pulmonary disease clusters.

Discussions with the Lipa City Junior Jaycees and other youth groups about air pollution have resulted in pledges from the groups to snuff out garbage fires in their neighborhoods. The particulate meter will also be used in Lipa City to measure air quality in areas around Mabini School and Casa Segunda, where there is heavy traffic.

Alfred Brownell, President of Green Advocates in Liberia, is using equipment to monitor effluent from a large Firestone rubber facility near Harbel, on the Farmington River.

E-LAW U.S. scientists will help partners use this equipment and evaluate the data so communities can protect themselves. By sharing this equipment with partners around the world, E-LAW will help replicate victories and magnify the impact of the equipment.

Many E-LAW partners are working in communities where polluted air and drinking water take a terrible toll. Now, the Environmental Law Alliance Worldwide is helping people fight back. We are equipping our partners with state-of-the-art scientific equipme