Tackling the Plastic Crisis in the Philippines 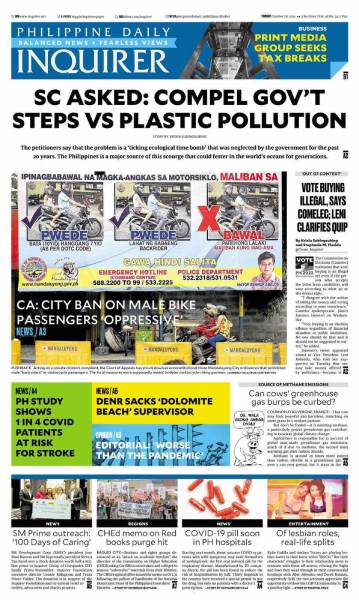 The Philippines is one of the top sources of plastic waste going into the ocean. ELAW partners there have served and filed a petition demanding their government step up to solve the scourge of plastic pollution that it has ignored for decades.

We applaud Oceana, Filipino youth, fisherfolk, lawmakers, NGOs, and others who have issued this call to the National Solid Waste Management Commission and state agencies to fulfill their mandates, to reduce plastic pollution at its source, and to ban single-use plastics in the Philippines.

The petition states that the government has allowed: “unabated emission of millions of tons of plastic waste into every nook and cranny of the Philippine archipelago…exposing an uncountable number of humans and wildlife to hazards that will last for up to thousands of years in the environment.”

At the request of counsel for the Petitioners, ELAW provided the key Judicial Affidavit that makes the scientific case for why plastics are non-environmentally acceptable, as well as legal research that provided model plastic waste regulations from around the world.

"This case gives hope to many that key decision-makers will finally address the plastic crisis in the Philippines," says Golly Ramos, Vice President, Oceana.