Green Advocates ELAW partner Alfred Brownell has won a tremendous victory for Liberia's forests, the rule of law, and for citizens who want a voice in decisions about how their natural resources are managed.
Just a few years ago, Liberia's forests were being cut with no regard for their long-term health or the wishes of local communities. Alfred and his organization, Green Advocates, are making tremendous progress. (Alfred is in the center of the staff photo, at the right.) They have helped craft basic environmental laws and are helping the government enforce those laws. 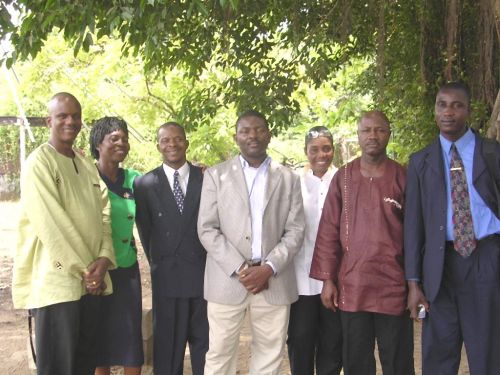 Liberia's new laws require logging companies to prepare an Environmental Impact Statement (EIS) before any logging operation is approved. The EIS system is designed to inform citizens about potential impacts of logging and give them an opportunity to participate in decisions about proposed logging.

In 2007, Tarpeh Timber Corporation submitted an EIS to move forward on one of the first timber sale contracts issued by the government since enactment of Liberia's forestry reform law in 2006.

ELAW Staff Scientist Mark Chernaik assisted Green Advocates by reviewing the EIS for the proposed project. Mark discovered many significant flaws in the EIS, which Green Advocates included in a letter to Liberia's Environmental Protection Agency.

The timber company characterized the forest as "highly degraded." Mark reviewed satellite images that showed a completely intact forest. The logging company also neglected to include any baseline information about flora and fauna in the timber sale area, and had not incorporated best practices into its logging plan.

Liberia's Environmental Protection Agency rejected the logging company's EIS and cited many of the flaws identified by Green Advocates. The Agency directed the company to prepare a new EIA and said it must identify and protect critical habitats.

This is a big victory for:

Upon learning of the government's precedent-setting decision, Alfred wrote to Mark:

"Once more you have come to the rescue. Thanks a million."

Congratulations to Alfred and everyone at Green Advocates!