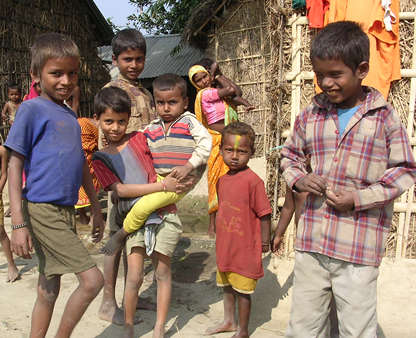 Children in the village of Dubi on Nepal`s Judi River are exposed to toxic effluent from a tannery factory across the river. PHOTO: Meche Lu

Nepal is an extremely difficult place to protect the environment through law. It is one of the poorest nations in the world and Maoist guerillas foster violence and fear. The rule of law is tenuous: in February of 2005, Nepal`s King Gyanendra dismissed the Prime Minister and his government, instituted martial law, and declared himself absolute sovereign.

Despite these obstacles, grassroots attorneys and scientists at the Forum for Protection of Public Interest (Pro Public) are doing great work. Pro Public has worked with E-LAW U.S. since 1995. Together, we have won environmental victories under extreme duress.

Nepal is rich in natural resources, but the average worker earns $240 per year and less than half the population can read or write. Poverty, illiteracy, and political instability have fueled violent opposition.

Her first stop was the Bagmati River. It runs directly through Kathmandu and holds deep religious significance for the Nepalese people. Laws regulating discharges into the river are not enforced, and today this sacred river runs black and has an unbearable stench. Pro Public relied on scientific support from E-LAW U.S. to win a Supreme Court Order to prohibit dumping in the Bagmati River and is now working to ensure that the order is enforced. 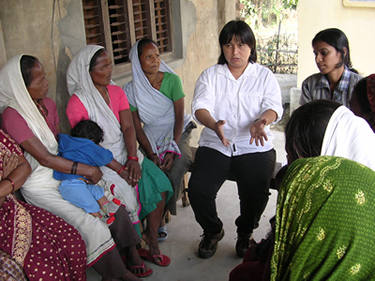 Next, Meche visited Balkhu – one of Kathmandu’s few open spaces. This proposed park site wasn`t always open to the public. Ten years ago, the government used the park for its Publication House. In 1997, Pro Public won a court case returning the park to its rightful owners: the people of Nepal. "Now you can breathe the fresh air and children have a place to play their games," says Prakash Mani Sharma, founder and General Secretary of Pro Public.

From Kathmandu, Meche headed to Biratnagar, Nepal`s second largest city and home to a Pro Public branch office. Pro Public staff in Biratnagar focus on water contamination and fighting corruption. They accompanied Meche on a visit to local tanneries. Appalled by the conditions, Meche reported, "The smell was overwhelming, my airways constricted, and I had an asthma attack."

Tanneries in Biratnagar have been dumping untreated wastes in the Judi River for many years. Meche said, "I saw plant workers cleaning debris from open channels so that a non-treated blue salty sludge could flow more easily into the river." Across the river, Meche visited the village of Dubi. Children here play in the river`s polluted waters and residents collect this water for use at home and on the farm. E-LAW U.S. is working with Pro Public to demand that Biratnagar`s tanneries treat their toxic effluents before discharging them to the Judi River. 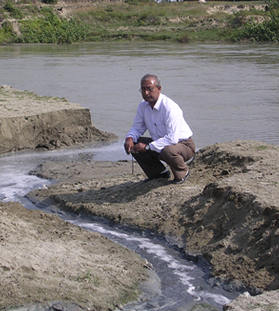 Pro Public attorney Prakash Upreti near a canal where effluents are discharged into the Judi River.
PHOTO: Meche Lu

"I remember meeting Prakash and the farmers of Bhaktapur in 1996 to figure out a solution to this public health hazard," says Mark Chernaik, E-LAW U.S. Staff Scientist. "It is incredibly rewarding to see this victory." E-LAW U.S. Staff Attorney, Jennifer Gleason, also worked on this case. She provided U.S. case precedents that supported Pro Public`s legal arguments and connected Prakash with Macon Cowles, a private environmental attorney in the U.S. who provided pro bono support.

Pro Public`s work under harrowing circumstances is an inspiration and E-LAW U.S. looks forward to future collaboration with its partners in Nepal. Many thanks to the U.S. Bureau of Educational and Cultural Affairs for its support of E-LAW`s work in Nepal.

E-LAW U.S. has worked with grassroots advocates at the Forum for Protection of Public Interest (Pro Public) in Nepal since 1995. Despite overwhelming obstacles, Pro Public has celebrated landmark environmental law victories in Nepalese courts.