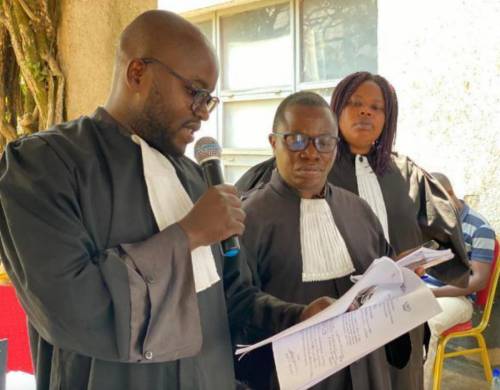 ELAW partner Olivier Ndoole shares great news that the mobile court formed to hear the large backlog of cases against wildlife trafficking, illegal fishing, and natural resource exploitation in Virunga National Park, including Lake Edward have resulted in many convictions.

Olivier’s organization, Alerte Congolaise pour l’Environnement et les Droits de l’Homme (Congolese Alert for the Environment and Human Rights — ACEDH) collaborated with the judicial sector, Virunga National Park, the Congolese Institute for the Conservation of Nature (ICCN), and other actors to hold a mobile court over the course of 10 days in July to try dozens of pending legal cases related to crimes against wild fauna and flora in Virunga National Park, including cases of trafficking elephant ivory, hippopotamus teeth, and lion skins. All the objects seized in the cases of illicit trafficking were handed over to the State through ICCN at the request of ACEDH.

Armed conflict in the area has delayed trials for these cases. Mobile hearings allowed the judiciary to hear and rule on the large backlog of cases while respecting human rights. The Virunga Foundation provided the defendants with lawyers, with the aim of ensuring the right to a fair and equitable trial. The trials were made open and transparent by inviting the press and the public. More than 600 community members attended to learn about the law relating to the conservation of nature within Virunga National Park.

Olivier says, “Many thanks to ELAW attorneys for the useful legislative information and international law on biodiversity that helped ACEDH prepare for the mobile hearings. These trials have been a key action in the fight against illegal wildlife trafficking and natural resource exploitation in protected areas like Virunga National Park. It helps not only fight the impunity with which poachers have been operating, but also allows the community to access legal information and spreads awareness of the importance of conservation of nature. The judgements rendered by the Congolese judges in this matter are great victories for the law of nature and justice for biodiversity.”

Congratulations to ACEDH and its partners for challenging crimes against wild fauna and flora. We applaud this great work enforcing legal protections for Virunga National Park.