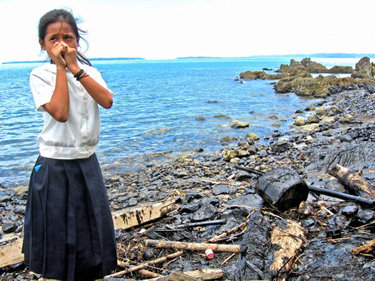 Communities around the world are suffering because of the world`s growing need for petroleum. Waterways and coastlines are being contaminated by oil spills while fragile ecosystems are threatened by new oil development.

The Environmental Law Alliance Worldwide is helping partners around the world protect communities and wild places from the abuses of the oil industry. The following are a few highlights.

In August 2006, the Solar I oil tanker sank in rough waters off Guimaras Island in the Philippines, spilling thousands of gallons of oil. If this tanker had been a double-hulled vessel, the accident might have been prevented. ELAW is working with partners at the Environmental Legal Assistance Center (ELAC) in the Philippines to review the Philippines` response to this and past oil spills, and look for ways to protect marine resources from future oil spills.

ELAW is also working to ensure that clean up operations do not further jeopardize local communities. Following the spill, local newspapers reported that Petron (the largest oil company in the Philippines) had applied dispersants to get rid of the oil quickly, rather than do a proper cleanup. Dispersants were applied near mangroves and nearby residents complained of toxic fumes and respiratory ailments.
ELAW provided its partners at ELAC and Tanggol Kalikasan with information explaining why chemical dispersants are typically not advised for shallow near-shore waters, mangrove areas, marshes, or waters over coral reefs and seagrass beds.

While communities recover from last year`s spill, the search for new oil continues. In June, ELAW helped its partners at ELAC challenge plans by NorAsia Energy to search for new oil reserves using seismic testing in the channel between Cebu and Bohol. Seismic testing involves sending sound waves through an underwater cable dragged by a boat and poses serious risks to marine mammals.

ELAC Director Raul Barbarona discussed NorAsia`s plans in radio interviews with government authorities and representatives of the energy company. He received the scientific information he needed from ELAW to educate Filipinos about the real risks of seismic testing.

In May, a government-owned oil refinery on the Chemu II Lagoon in Tema, Ghana, had a massive oil spill. The lagoon flows into the Gulf of Guinea, spreading the contamination to saltwater mangroves, fisheries, and bird habitat. ELAW partner Augustine Niber at the Center for Public Interest Law in Accra is defending the rights of local fishermen left destitute by the polluted waterway. Augustine is drawing legal and scientific support from ELAW and its partners around the world who have responded to similar environmental disasters. 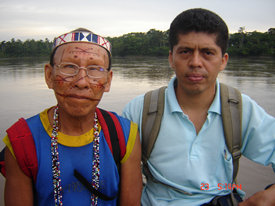 Pablo Fajardo (right) on the Aguarico River, with a villager from Secoya

Oil drilling in Ecuador has contaminated hundreds of square miles of Amazon rain forest. ELAW partner Pablo Fajardo is working to hold oil companies accountable for decades of polluting activities. The May 2007 "Green Issue" of Vanity Fair includes an excellent report on Pablo`s work. Pablo grew up in poverty and worked for many years as a laborer in forests and oil fields. He completed his secondary education in night school and earned his law degree three years ago via a correspondence course. Already, in his very first trial, he`s leading a massive suit against Chevron. ELAW is helping Pablo with legal research.

In June, the Republic of Buryatia`s Supreme Court, in Russia, ruled that an oil pipeline being built across Siberia should be rerouted away from Lake Baikal, the deepest and oldest lake in the world. President Putin voiced his objection to the pipeline route last year and this ruling will ensure the lake is protected. ELAW Staff Scientist Mark Chernaik helped advocates at Ecojuris challenge plans to build this oil pipeline near Lake Baikal.

In February, 5,000 barrels of crude oil leaked from an oil terminal in Bocas del Toro, Panama, creating a two kilometer slick along coastal lands of more than 10,000 Ngobe indigenous people. Noxious fumes have sickened community members and local fishing grounds have been contaminated. ELAW partner Hector Huertas is working with the Ngobe to address this environmental tragedy. Hector has called on ELAW partners around the world to help advance his efforts in seeking justice for the Ngobe.

For thousands of years, the Achuar lived relatively undisturbed in the rainforests of present-day Peru. In the 1970s, multinational oil companies began drilling for oil and dumping contaminated by-products into the Northern Amazon. These toxins have caused serious health problems for the Achuar.

Last year, the largest offending oil company signed an agreement to stop discharging effluents in the rivers and invest $20 million in cleaning up the environment. Lily is now working with the community to ensure that the agreement is enforced. 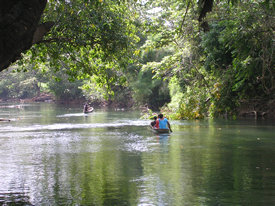 A Texas-based oil company tried to perform seismic testing to explore for oil in Belize`s Sarstoon-Temash National Park. ELAW scientists secured expert affidavits setting out the potential environmental impacts. The Supreme Court of Belize cancelled permission for seismic testing last year and ordered the corporation to assess the environmental impacts of such testing in a transparent manner before they may apply for permission.

ELAW scientists are now reviewing the environmental impact assessment (EIA) submitted by the corporation in June, to determine if it accurately reflects the true impact of the project. ELAW partners in Belize will use this assessment to encourage public participation in decisions being made about new oil development in Belize.

Communities around the world are suffering because of the world`s growing need for petroleum. Waterways and coastlines are being contaminated by oil spills while fragile ecosystems are threatened by new oil development. ELAW is helping our international p