Awas Tingni means “Pine Creek” in the language of the Miskito, an indigenous group on Nicaragua’s Caribbean Coast. But the name has become synonymous with a landmark case in the Inter-American Court of Human Rights in 2001 that confirmed the indigenous Mayangna community had the right to collective ownership of several thousand acres of land they traditionally inhabited.

Community members brought that case to contest a Nicaraguan government deal to allow logging on Mayangna land. Lottie Cunningham Wren, an attorney and member of the Miskito peoples, was the legal representative and an expert witness at that trial.

Today, more than 15 years later, the Mayangna, Rama, and Miskito peoples are still waiting for the government to obey the court order to demarcate and title community lands. Meanwhile, Miskito land is being occupied by nonnatives, and disputes over who owns what has led to extreme violence and killings.

Turning that court win into an on-the-ground reality has been slow going.

Lottie didn’t start out working as an environmental attorney. She became a nurse during the civil war of the 1980s. But despite her care for others, she felt that she wasn’t making a meaningful difference. She recognized that the oral traditions she grew up with wouldn’t protect her community in the 21st century. So she went to law school, became an attorney, and founded Centro por la Justicia y Derechos Humanos de la Costa Atlántica de Nicaragua (CEJUDHCAN). Today, she is at the center of the work to restore and protect the lowland savannah and forests of the north coast.

Her work represents a unique nexus of human rights defense and natural resource protection, and that fits well with her indigenous culture. “We see the land as a mother, something integral,” she says.

ELAW has been working with Lottie for many years.

“One of the most important things with ELAW is the help that we get, the technical, legal area, the scientific area, and information about how to approach our cases,” she says. ELAW has also been useful in helping her organization develop communication strategies.

“We didn’t know about that at all,” she says. “How to use media, how to use radio, and how to create public opinion with the media. Those are things that we have been learning.”

The expertise flows both ways. Lottie has also shared strategies with Native American tribes working to protect their land in the United States.

Her work at home continues: “We want to obligate Nicaragua to implement the mechanism to demarcate and title indigenous peoples’ land,” she says.

That work comes with risk. Lottie is one of a handful of ELAW partners whose lives have been threatened because of their outspoken work on behalf of communities. ELAW is working to help Lottie and many more ELAW partners assess and manage risk, and stay safe. 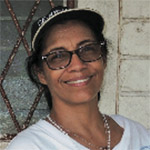