Olya says she was inspired by "first-day-in-court" stories that she heard from E-LAW partners at the 2003 E-LAW Annual Meeting. Following that meeting, Olya went to court for the first time and challenged government plans to build a navigation canal that would have cut through protected wetlands in the Danube Delta, one of the most valuable wetlands in Europe.

For her efforts, she came under critical scrutiny by officials in the notoriously corrupt pre-Orange Revolution regime, under which few spoke out against the government.

Olya directs the legal unit at Environment-People-Law (EPL)  in Lviv. In May, she traveled to Eugene and spoke at the E-LAW U.S. 15th Anniversary Celebration. 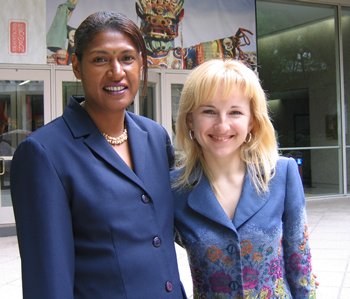 Annie uncovered evidence of widespread corruption and complicity in the Papua New Guinea government that allowed rampant, illegal logging that is destroying the largest remaining intact block of tropical forest in the Asia Pacific region. In 1997, her first year practicing law, Annie successfully went to the Supreme Court of Papua New Guinea to force the logging interests to pay damages to indigenous land owners. Annie is the CEO of the Environmental Law Centre and has collaborated with E-LAW since 1996.

Following the April award ceremony, Olya and Annie traveled to Washington, D.C., to meet with members of Congress and the National Press Club. While in D.C., Olya responded to a flood of e-mail congratulations that she and Annie had received from colleagues around the world through the E-LAW network:

"I was overwhelmed while reading your e-mails. It`s a big honor for us and we were thinking about all of the public interest environmental lawyers . . . all of you who are doing great job!! I was inspired by you during annual meetings and I recall first-time-in-court stories that gave me more strength to start court practice . . . Your inspiring example made considerable contribution. Only all together will we make an impact on Planet Earth!!"

The Goldman Environmental Prize  has given recognition, visibility, and credibility to Olya, Annie, and five other E-LAW partners for their important work with communities seeking to protect local environments:

Congratulations to the newest Goldman Prize winners, Olya and Annie!

ELAW partners Olya Melen of Ukraine and Annie Kajir of Papua New Guinea have each won a 2006 Goldman Environmental Prize, the world`s largest award for grassroots environmentalists. Olya was recognized for her fearless work defending wetlands in the Danu